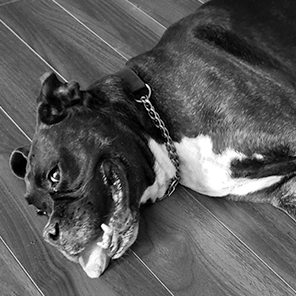 Of all the monkeys in the office, Rohan’s bark is easily scarier than his bite. A whopping 92 lbs of canine love wrapped in a perfectly enthusiastic frame, Rohan manages to keep the office free of external interruptions, mailmen, and small children selling cookies (yeah – nobody in the office enjoys that last one).

When not guarding the work environment from mailmen and pedestrians, Rohan can be found gold-bricking under a table, chewing bones in the team room, or just haphazardly jumping developers for their lunch. With a dog’s innocence and energy, Rohan is the purest example of the Cheeky Monkey attitude in full effect – he has a fun life in the office, and he takes great pride in his daily tasks.